A major medical hospital had built a concrete pit to hold water for their fire suppressant system.  After two attempts to seal the pit with an applied coating the pit still leaked into adjacent areas of the hospital.

The architect firm chose a lining system by Witt Lining Systems as the remedy for the leaking pit.  The Witt liner was chosen because the liner is not bonded to the pit walls and only mechanically fastened around the perimeter.  The drop in liner is not subject to failure due to cracks in the concrete.

The installation of the liner did not require any concrete repair work or sand blasting as would have been necessary with an applied coating.  Because the area was considered a confined space entry, the expense to do such work would have added significantly to the cost of the project.  Instead a geotextile padding was added to the walls and floors of the pit to protect the liner.

The liner was pre-fabricated in one complete piece.  The pit had a cut out in one corner which was also built into the liner.  The liner was slid through the access opening in the roof to the floor of the pit.  The bottom of the liner was unrolled and the sidewalls pulled up and hung on the anchor bolts that had been installed along the top perimeter.  Compression strips with nuts and washers and sealant caulk were applied to finish the liner installation.  The one pipe penetration on the sidewall was handled with a factory made pipe boot and installed in the field by the factory technician.

The entire liner installation was completed over a three-day period.  The tank was filled with water and deemed leak free by the job supervisor.  The liner should now provide years of worry free service to the hospital.  Download the case study here. 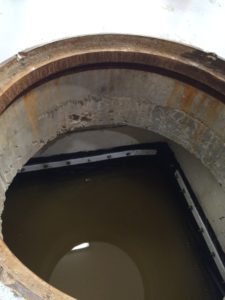